The magnificent, adorable Liz and Lisa & a deleted scene. 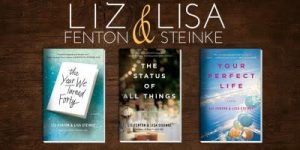 Fans of Liz and Lisa are going to go nutty for this intriguing and revealing backstage look into The Year We Turned Forty. I met Liz and Lisa at {Pages} Bookstore during their tour for  Your Perfect Life (which is awesome, btdubs) and they were just as adorable and fun as their pictures! A best friend writer’s team?  Yes. Hell-ya’.  They make me wish I had a writing parter, to be honest.

Naturally, I asked them to show us a deleted scene from their latest novel, The Year We Turned Forty about three best friends who get the chance to return to the year they turned forty. If you haven’t read it yet, get it now  and look for my give-away on @jgoochhummer.

This is what people are saying about it:  The Year We Turned Forty is a spot-on, delightful read for anyone who has ever wondered about the road not taken.” (Allison Winn Scotch, New York Times bestselling author )

I am so grateful to Liz and Lisa   for  taking us into their brilliant writers’ minds.   Visit their website to find out more about the awesomeness of Liz and Lisa.

Liz and Lisa chose to write about Jesse, because well, read on and you’ll see …

Deleted Scene From The Year We Turned Forty by Liz Fenton & Lisa Steinke:

After Jessie lost the third game of pool in a row, Peter had whispered in her ear that they should go somewhere else, then without exchanging another word, he’d opened the passenger door of his car and helped her inside, driving in silence to a Holiday Inn while his warm hand rested on her upper thigh. They walked in nervously and Peter had offered to buy her another drink in the sad little bar off the lobby after securing a room, Jessie shaking her head as she moved quickly toward the elevator, not wanting to lose her courage, the months of flirtation propelling her on. Once in the room, she’d did her best to ignore the worn carpet and peeling wallpaper as he did what she imagined him doing for months—ran his hands through her hair and touched his soft lips to hers. One kiss wasn’t the end of the world, she told herself as she leaned into his full mouth. When he slipped his knowing hand under her skirt, she reasoned that at least they weren’t having sex. And when he nudged her to the bed’s edge and started to make his way inside her, she’d tried to rip herself away. But she couldn’t—not because of how he felt, but because of how he made her feel—beautiful and in a strange way, powerful. In that moment, she felt like the layers of her life had been peeled back, exposing the girl she used to be. She felt young and alive.

But that feeling vanished as quickly as it came, Jessie wiping a tear from her eye as she whispered that they had made a mistake, while tangled in each other’s arms, her skirt still hanging around her ankles. Guilt was already beginning to fog her perspective, and what had felt fantastic just moments ago, now felt dirty and wrong. Still, as Peter nodded, telling Jessie not to feel bad, that she was gorgeous and funny and smart and that it was the best sex he’d had in years, she fought hard against slipping back into his grip with each adjective. For whatever reason, she desperately wanted to view herself the way Peter saw her, and it was terrifying to think that she’d been willing to risk her entire life for it.

This scene was rewritten because this character, Jesse, a married mother of two, was not coming across as feeling regretful about her one-night stand. She seemed conflicted, but not regretful, which we knew could be a problem for our readers. It is already a risk to create a character that cheats on her husband. So, in our opinion, if you’re going to do it, you need to make sure you handle the character’s response to her indiscretion in a responsible way. In our story, Jesse wanted to stay married to her husband, who by all accounts, was a good man. He made mistakes but those certainly didn’t excuse what Jessie had done or the choices she made after she slept with another man. We wanted to make sure we were showing Jessie’s reasons for the affair, but also not making excuses for or justifying her behavior. We knew we needed to write her regret in a way that would make the reader, at the very most, empathize with her, and at the very least, not hate her. It’s a fine line. But we felt strongly that to make this a good book, we needed a central conflict that made our readers uneasy–that made them think, that challenged their views.

Whose idea was it to delete/rewrite them (agent, editor, spouse, dog)?

It was our agent, Elisabeth Weed, who pointed out that Jessie was not developed how she needed to be. After she read a very early draft of THE YEAR WE TURNED FORTY, which included this excerpt, we believe her exact words were, “I hate her for what she’s done.”  We knew right then that there was no way we could move forward until we edited Jesse.

Did you cry when you deleted/rewrote them?

No. But it was a lot of work to go through the entire manuscript and look at Jesse through different eyes. But in the end, it made the book one thousand times better. And this is one of the many reasons we feel so lucky to have Elisabeth as our agent—she’s a brilliant editor. 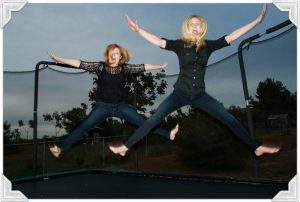 Jennifer Gooch Hummer is the award-winning author and screenwriter for her debut novel, GIRL UNMOORED. Raised in Boston, Jennifer graduated from Kenyon College with a B.A. in English and moved to Los Angeles where she read scripts for major talent agencies and production companies. A true believer in fairies, Jennifer currently lives in Southern California with her whistling husband, three teenage daughters, and two slightly neurotic rescue dogs. OPERATION TENLEY is the first book in the series, THE FAIR CITY FILES.
View all posts by Jennifer Gooch Hummer →
Deleted Scenes, News
best friends, family life, LizandLisa, marriage, The Year We Turned Forty